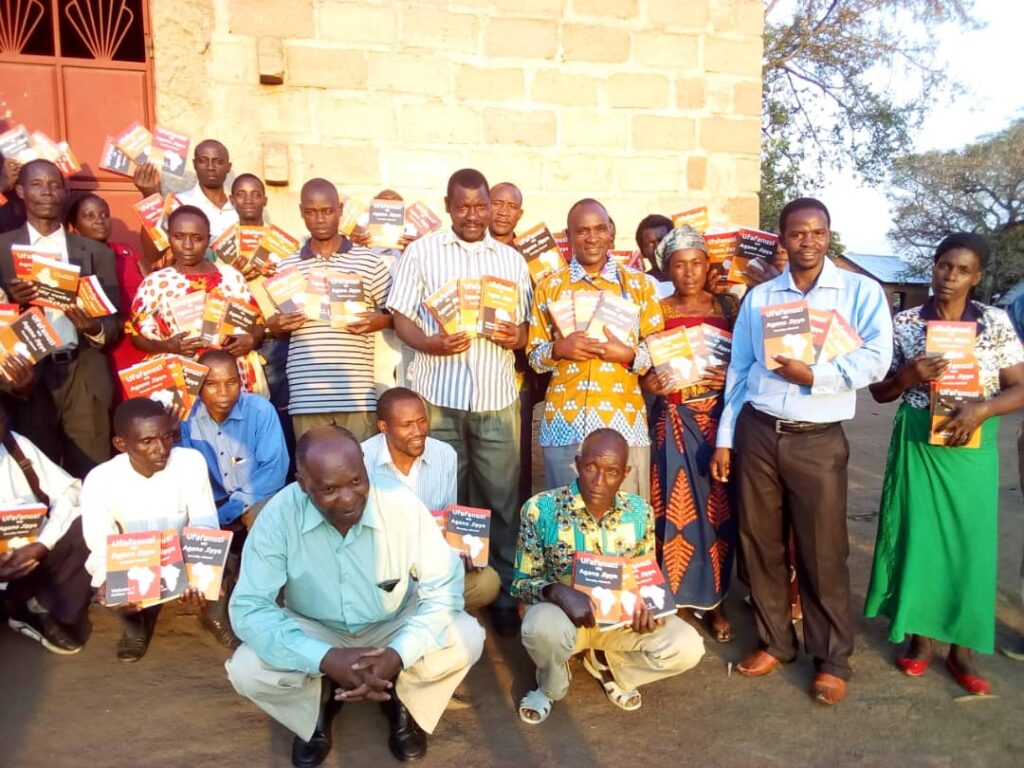 Swahili commentary sets back in print!

The Akan people of Ghana have a saying: “Se wo were fi na wosankofa a yenkyi.” Roughly translated it means, “It is not taboo to go back and fetch what you forgot.” From the proverb comes the word ‘Sankofa’, which means, “Go back and get it.” The symbol of Sankofa is a bird moving forward but with its head turned backwards, in effect going forward while remaining conscious of the past and the wisdom contained there.

At APF, we have had a sense of the importance of moving forward but looking back for some time. Our friend and partner Rev Dr Kate Coleman put it to us like this: “When you get on the train, choose the seat facing backwards.” Move forward but remain conscious of where you’ve come from.

So, while eVitabu, Jubilee Trees, Growing Greener, solar energy projects, locally-led pastor training in-service workshops and many other new and exciting initiatives absorb much of our time, we’ve also been keen not to forget good things from APF’s past. To go back and fetch what we forgot.

For example, our Tanzanian friends and partners have been asking for a reprint of our New Testament Bible Commentary sets ‘Ufafanuzi Wa Agano Jipya’ for some time. Written in the 1990s by Sister Dorothy Almond, a Church Army Tanzania missionary from Yorkshire, Ufafanuzi Wa Agano Jipya remains to our knowledge the only complete New Testament Bible commentary written in Swahili, not a translation into Swahili. With its clear language and simple explanations, demand remains high amongst poorly trained rural pastors who rarely have access to any other books beside a Bible.

It has taken us a while to get it right but at last, three thousand copies recently landed at the port in Dar es Salaam, Tanzania from printers in India. APF partners in Tanzania including Heavenlight Luoga (Karagwe), Amos Nkini (Arusha), Timothy Saulo (Mwanza) and Emanuel Mhina (Morogoro) have been busy distributing hundreds of copies to rural church leaders across their regions.

Another 500 sets are available from the shelves of SomaBiblia Christian bookshops across Tanzania where they are selling at heavily subsidised prices to ensure they remain affordable to pastors.

We are deeply indebted to our generous donors in the UK and our committed partners in Tanzania whose support have made the reprint of Ufafanuzi Wa Agano Jipya possible.   Asante Sana!

For Heavenlight, Amos, Timothy and Heavenlight as they distribute commentary sets at training workshops and through local bookstores.

That the faith of rural pastors using Ufafanuzi wa Agano Jipya would be enriched and their ministries strengthened.

For other APF literature projects such as the distribution of local language Bibles funded by OM Special Projects. 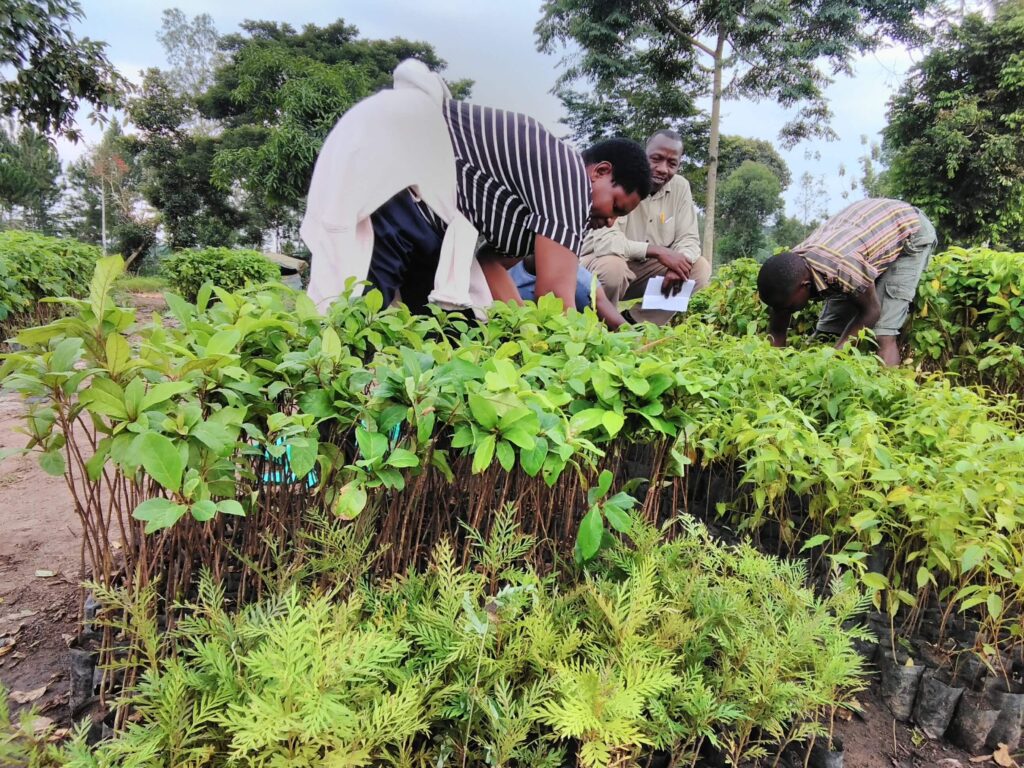 Trees have a special place in African culture. As the biggest plants on the planet, they give oxygen, store carbon, stabilise the soil and give life to the world’s wildlife. They also provide people with food, medicines and wood for tools and shelter. In many traditional African cultures, trees have a spiritual connection to the supernatural world of the ancestors.

Recently, I’ve been researching the role faith plays when African Christians think about the environment. My study demonstrates that trees still retain a very special place in African people’s thinking.

From Malawi to Uganda, from Cameroon to Ethiopia, Christian leaders responding to the research made a direct link between climate change impacts (changing weather patterns, increasing droughts and floods) and the dramatic loss of trees the continent has suffered over the last 50 years. One pastor put it this way: “Trees and African people are one. You cannot separate us.” Many expressed a sense of regret around the continent’s deforestation, but the reasons behind it are complex. Rapid population growth, demand for charcoal, poverty, and the erosion of traditional value systems which protected forests: none of these have helped.

Although responsibility for climate change undoubtedly lies primarily with industrialised nations like the UK rather than in Africa, Africans are showing how we should respond.  The African church is at the forefront of action on climate change. In Uganda, the Bishop of West Buganda, Rt Rev Katumba Tamale recently announced his support for Ugandan school children joining the famous Fridays for Future global school strikes.

Decrying that so many trees had been cut down and not enough planted, “The lives of our children are now at stake,” he said. Most Rev Thabo, Archbishop of Cape Town, says people of faith must walk the walk when it comes to climate change: “We depend on this beautiful web of life God created…  The challenge now is for us to become healers because we have failed to be stewards.”  After all, Africans are collectively the most vulnerable people in the world to climate change impacts whilst having the fewest resources to adapt to and mitigate for these.

This small pilot is only the beginning. Plans are already coming together for more planting next year. Climate Stewards has created a unique online tool called CQuestr that projects the amount of climate change causing carbon dioxide each tree plantation will capture and lock away. The projection is used to estimate a carbon price for the plantation, a monetary value for the carbon captured by the trees.

And as the trees grow, the churches will benefit from shade, timber, fruit, better soils, water retention and wildlife which will support higher crop yields. They’ll protect people, buildings and soils from strong wind, heavy rainfall and scorching sunshine.

This exciting project was conceived by Revd Peter Mugabi, BUU General Secretary. Peter has seen first-hand the impact of deforestation in Uganda. To implement the project, Peter is being supported by Bernadette Kabonesa, an expert in indigenous forestry from the Ugandan National Forestry Resources Research Institute.

With Peter’s passion and Bernadette’s expertise alongside APF’s project management experience and Climate Stewards’ CQuestr toolkit, this project has already captured the imagination. Last year, Christian Aid filmed Peter, Caroline Pomeroy (Climate Stewards’ Director) and myself as we began to put the Jubilee Trees project together. Christian Aid will use the short film as part of their campaign to coincide with the United Nations’ COP26 international climate change conference which will take place in Glasgow in 2020. 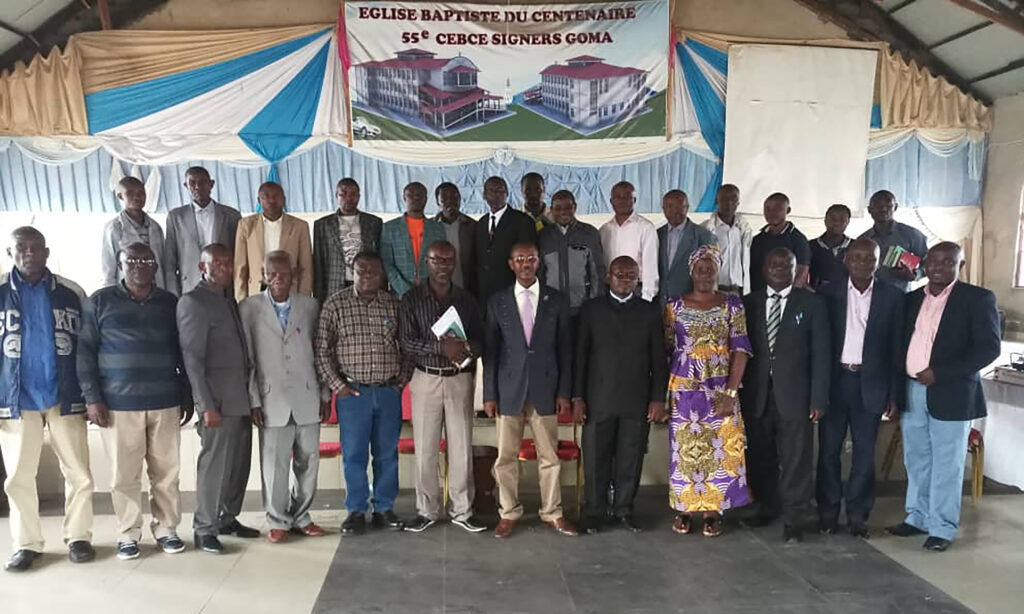 Preparing for Harvest in DRC

Heavenlight and Kesia Luoga are leaders in Deeper Life Ministries, a loose network of independent African churches. Based in rural north-west Tanzania, they are both well-respected Bible teachers. Recently, APF funding enabled Heavenlight and Kesia to hold a series of training seminars in the Democratic Republic of Congo where pastors from smaller denominations rarely receive any in-service training opportunities. Heavenlight wrote to update APF supporters on their progress:

About 119 youth, 100 women, 20 pastors and six evangelists attended the seminars which were coordinated by local Baptists groups. I spent most of the time exploring what it means to be ‘in the time of harvest’ based on Matthew 9:35-38 and John 4:35. I asked, “What does Jesus mean when he says, ‘Lift up your eyes, and look on the fields; for they are white already to harvest?’”

My teachings focused on three areas:

Firstly, we saw that Jesus was a man of great humility and compassion. He went through all the towns and villages to preach, to teach, to heal and to comfort people. Christians should be willing to do likewise.

Secondly, the world is waiting to hear the good news of God’s Kingdom, but the workers are few. Therefore, whoever we might be, we all have a part to play in God’s renewal of the world.

Thirdly, we are told to ask God to send out workers into his harvest field. This is a call to pray for and to equip evangelists, church planters, chaplains and Bible teachers. We should always be listening and ready for when God asks us to respond with love. We are all called to be involved in his Kingdom. 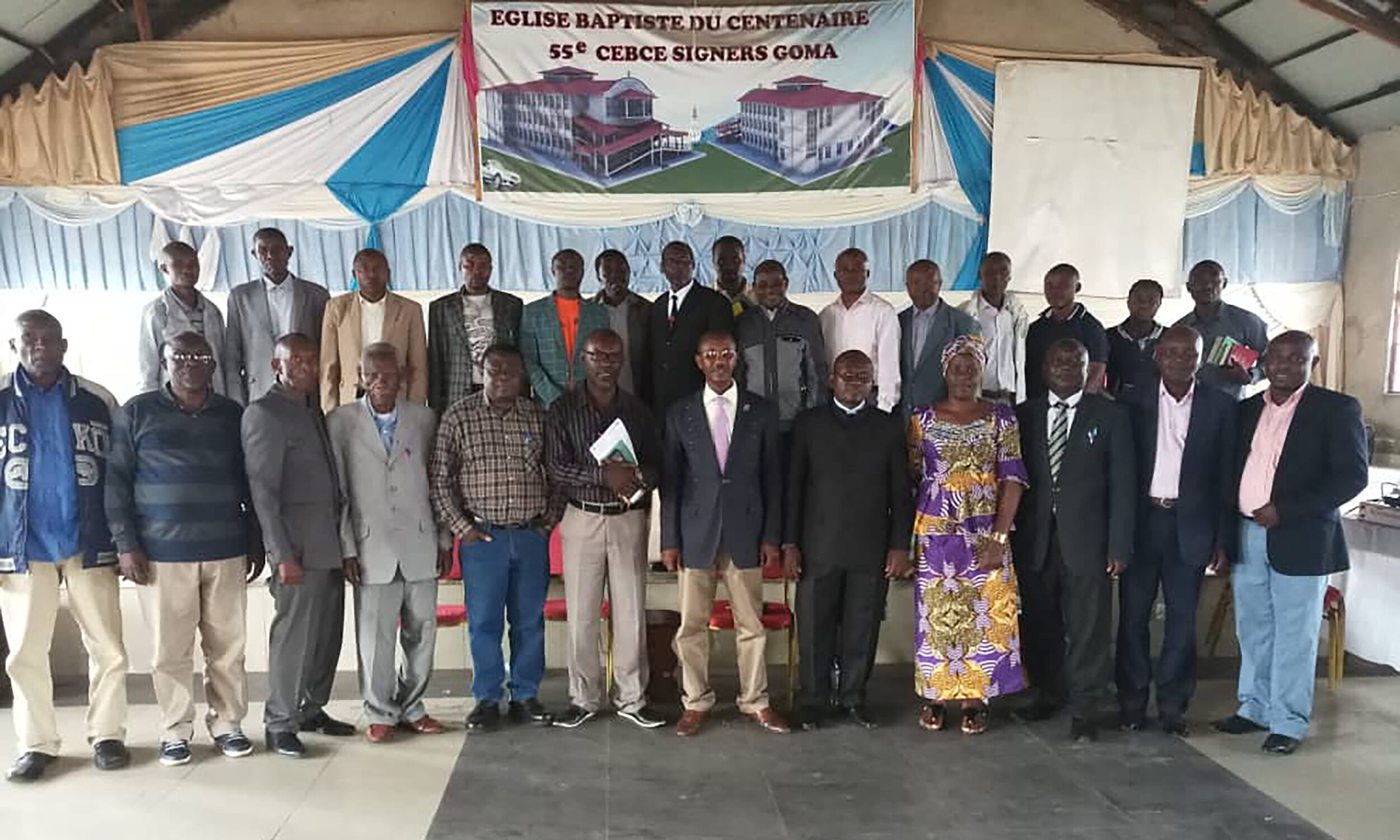 After the seminars I was asked to go back to DR Congo in August to speak at a three-day training event immediately preceding the General Assembly meeting of the Community of Baptist Churches of Eastern Congo (CEBCE).

As my schedule was tight, my answer had to be “Thank you but no.” Then they asked me to speak at the 2020 event, even offering to cover our expenses for transport, visas and accommodation for both Kesia and myself. I said, “Yes!”

The CEBCE is a network of about 800 churches and is one of many Baptist groups in DR Congo. Over 500 pastors gather every year at the General Assembly so this is a very wonderful opportunity for us to share with many church leaders.