In November, Dave Stedman met with key APF partners in Kenya. It was an important and busy few weeks but on the flight back, Dave was struck by how this nation of contrasts is reflected in those we work alongside.

From the developed conurbation and state-of-the-art traffic management systems of Nairobi to stunning views above the Rift Valley and cool evenings at altitude; from dusty dry lands where a village is named Makimeny meaning ‘this place is uninhabitable’ to temperate tea plantations nestled amongst rolling hills for as far as the eye can see; from the danger zone border with Somalia and Indian Ocean beach resorts in the east to lakeside retreats and rocky outcrops in the west. Kenya is a tapestry of topography, cultures and traditions where the developing world meets globalisation with full force.

In a nation that saw a 40% increase in teenage pregnancy during lockdown, the highest incidence being in rural counties, urban ‘millennials’ enjoy more screen time per day (7 hours and 40 minutes) than any other nation on earth. Kenya is by no means a cashless economy, but MPESA mobile money is preferred everywhere. At the same time, absolute poverty is visible on city streets and in village compounds. 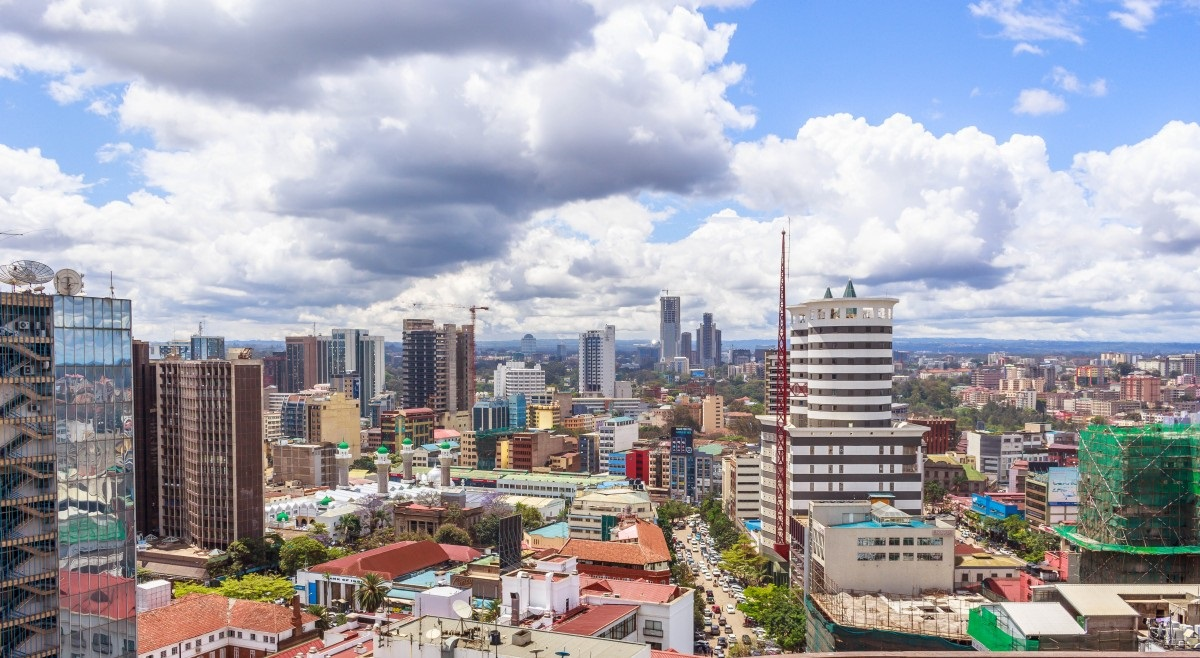 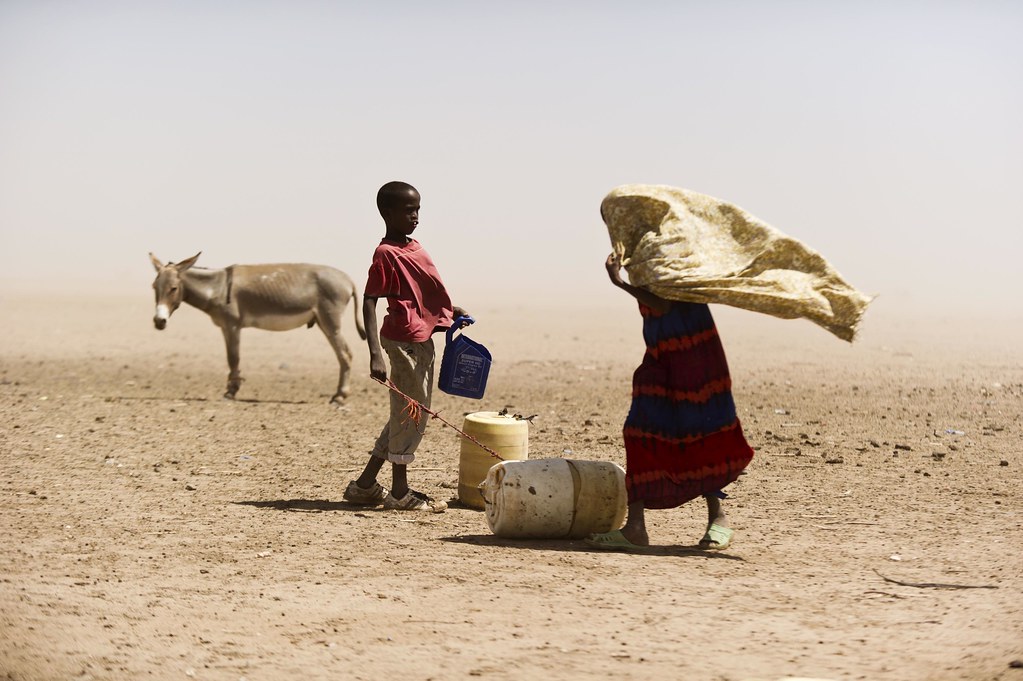 Kenya has leapt enthusiastically into the digital age. Despite adult literacy being just 61.5%, more than 80% of the entire population owns or has use of a smartphone. Language has struggled to keep up with technology. Swahili has no word for smartphone, so a phrase is used that literally translates ‘touch me slowly’. Luo similarly uses the phrase moula mus meaning ‘touch me softly’. There is both humour and wisdom in these names. When I talk about smartphones in Kenya, congregations laugh at my persistent requests for them to touch me slowly and softly, especially when the translator plays to the crowd and mimics a gentle caress as I speak! But a smartphone is a powerful tool, providing access to information both profound and profane. Such power must always be handled with care.

Kenya is a nation of extremes and these contrasts are seen in some of the people I met, worked alongside and travelled with on my recent visit.

Take Rossalyne Wanjiru. Rossa has worked as a part-time consultant for APF for a couple of years providing IT training, hardware installations and eVitabu support to users. She probably has a better understanding of how eVitabu works in context than anyone else. Rossa is thoroughly African in her approach to time and administration yet modern, independent and liberal in her opinions. She is trustworthy, and sometimes, painfully honest in her assessment of APF, eVitabu and myself! This willingness to challenge is uncommon but refreshing.

Rossa was raised a Roman Catholic but got a reputation among the nuns at school for her advocacy of other pupils who she felt were being mistreated. She is God-fearing but has little time for organised, institutional religion. Although Rossa would not endorse all the material within eVitabu, she believes it to be a necessary tool to educate leaders and protect vulnerable people from bad religion. She knows her Bible and we talk endlessly about theology. Most of the time she seems to find my explanations credible, even helpful. Like we all are, Rossa describes herself as a ‘work in progress’. Please pray for her, she is a special person who is yet to discover how much she is loved.

As an IT professional Rossa is remarkable. The girl who grew up writing messages in the garden with a stick and leaf now uses a stylus and smartphone to support eVitabu users. She runs her entire business from her phone. In her spare time, she has a talent for sport, an addiction to TikTok and is doing an online course in artificial intelligence. She tells me it won’t be long before I will be able to send my avatar to attend a Zoom call … touch me slowly, I can’t keep up!

In November, Rossa and I visited numerous and contrasting APF partners in Kenya:

In Nairobi, we met with Kingston Ogango (pictured below), Africa Regional Director of Alpha International. Kingston has a background in Christian media and he is a big fan of eVitabu. He is personally contributing resources to the app and will be part of a new eVitabu Council of Reference. APF is supporting Kingston with a grant for local language Bibles. 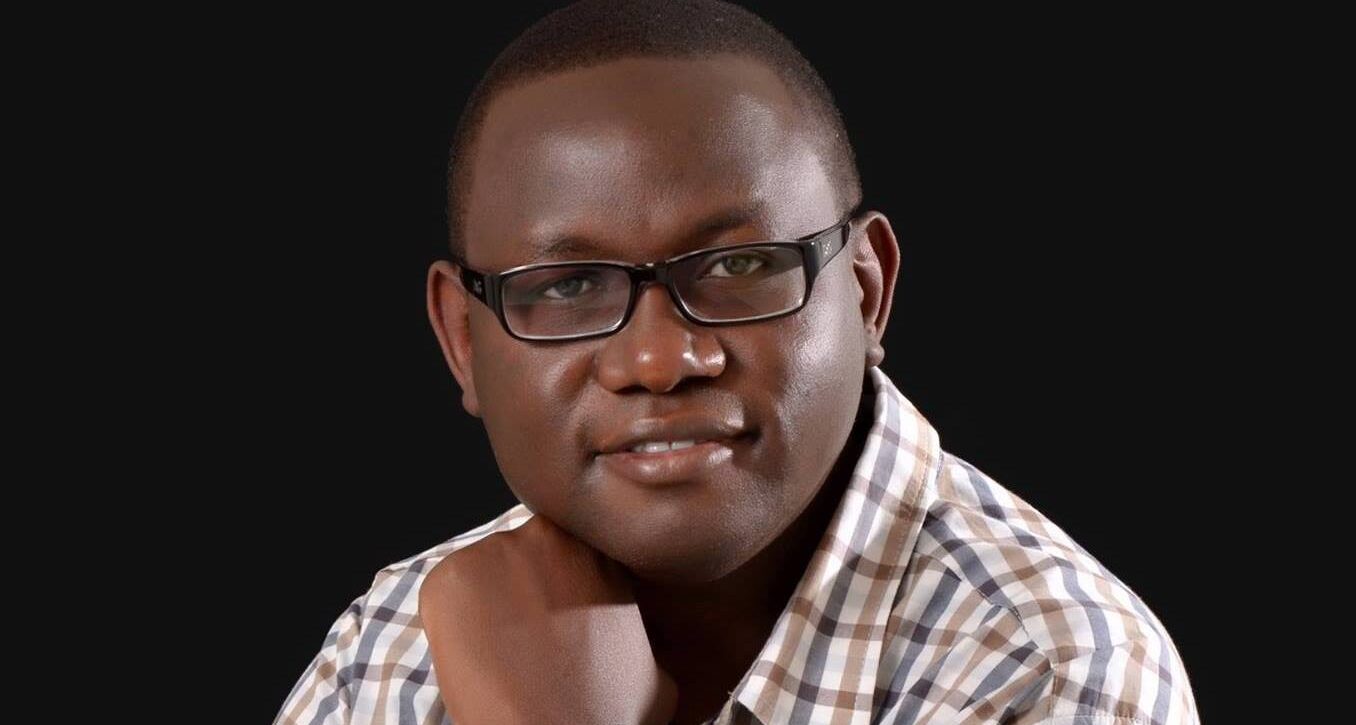 Ngong is about 30km from Nairobi. Having met Revd Chris Khatela and his wife Juddie by Zoom during lockdown, it was great to visit them at Ngong Restoration Assembly. Juddie has a background in corporate and NGO finance, she pioneers a micro-finance project that empowers women from the church and local community. Chris leads the church, lectures in theology and has many invitations to travel and teach. They are an impressive couple and we are committed to continuing our conversation about working together in the future.

BUS Radio is a community-based radio station reaching more than 200,000 people in Kajaido County, 80km south of Nairobi close to the border with Tanzania. APF is sponsoring Wi-Fi installation as a community resource, especially helping an outreach programme to teenage victims of FGM who come for basic IT training. BUS Radio broadcast an interview I gave and are mobilising church leaders to access eVitabu training scheduled for early 2022. The training will use the Wi-Fi we sponsored and the radio station as a venue. 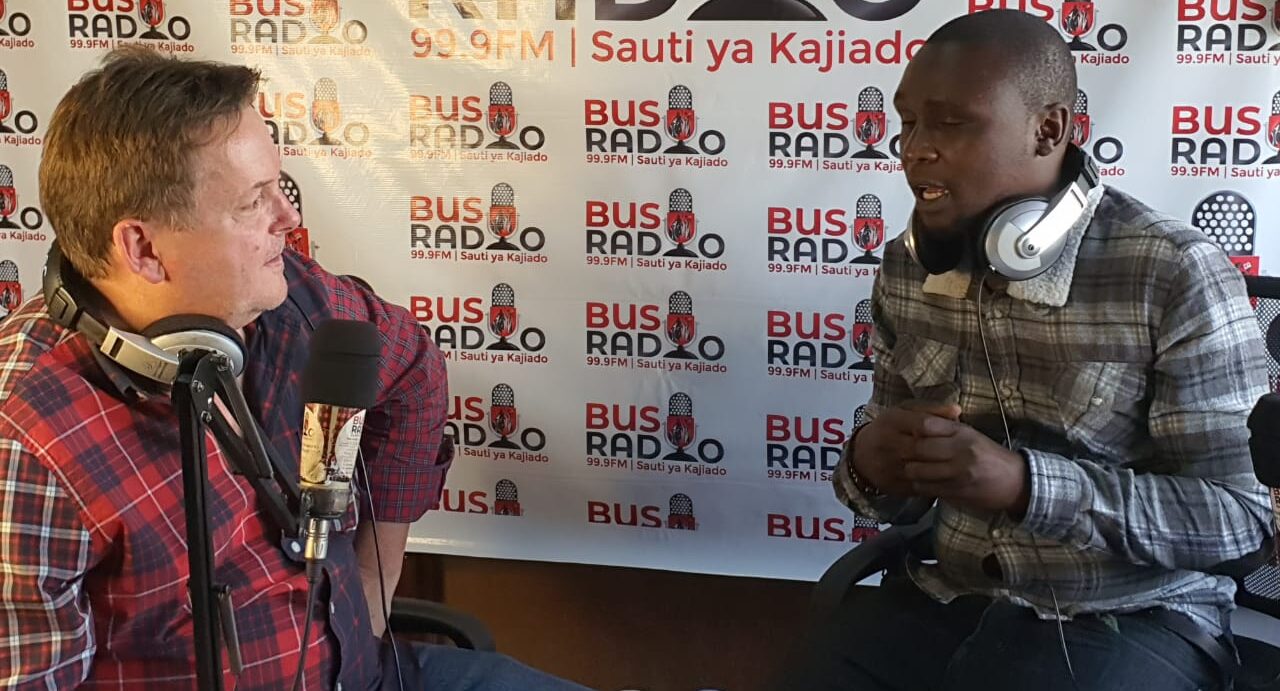 Daniel Odour Gwara, director of Renewal Ministries, has been an APF partner for several years and has been receiving an annual training grant since 2019. This was the first time I have been able to visit him on location. As well as a meeting with some of his fellow trainers and leading eVitabu induction training at Gongo, near Yala, Daniel organised an interview with Go Preach Gospel TV. It was great to share a meal at the family home with his wife and parents. 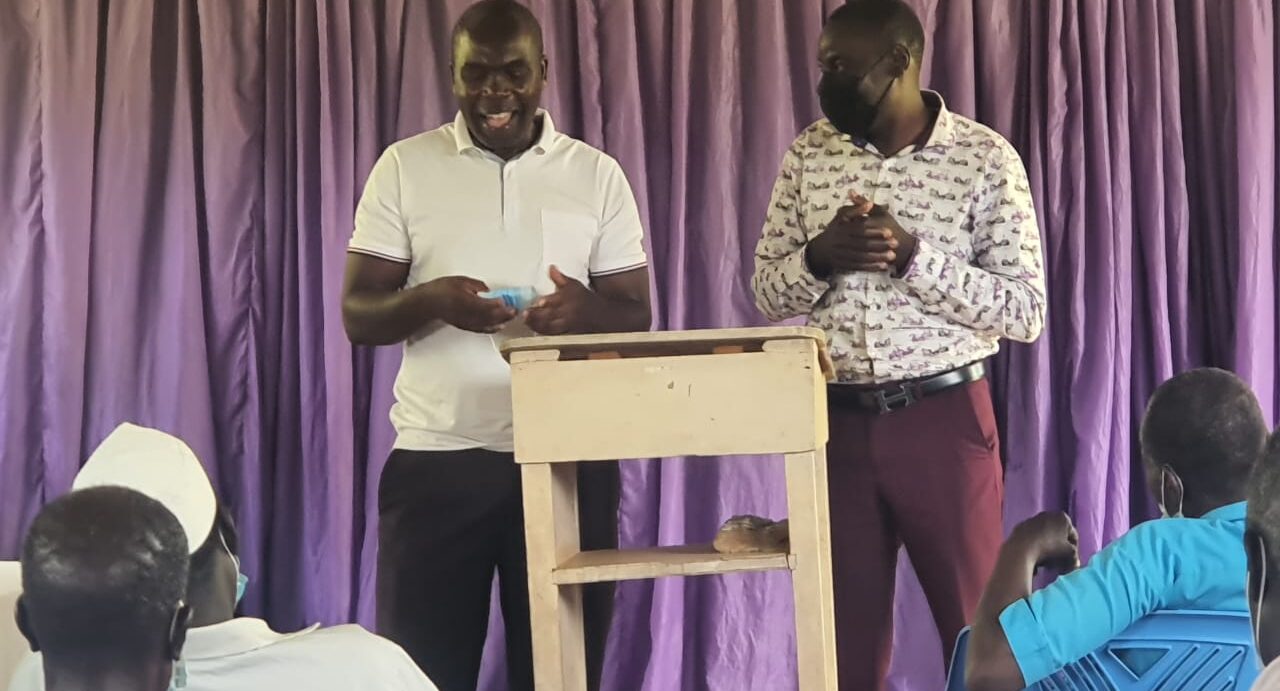 In Kapsabet, a series of meetings took place at St Paul’s University College to review progress on the IT suite, Wi-Fi installation and website development all sponsored by APF donors. We also discussed exciting future possibilities, including an in-principle agreement for eVitabu to contain courses certified by the college.

One member of the faculty asked whether he could share his YouTube sermons on eVitabu and I enjoyed a productive meeting with the Anglican Bishop of Kapsabet, Rt Revd Paul Korir. This was helpful in strengthening the partnership. 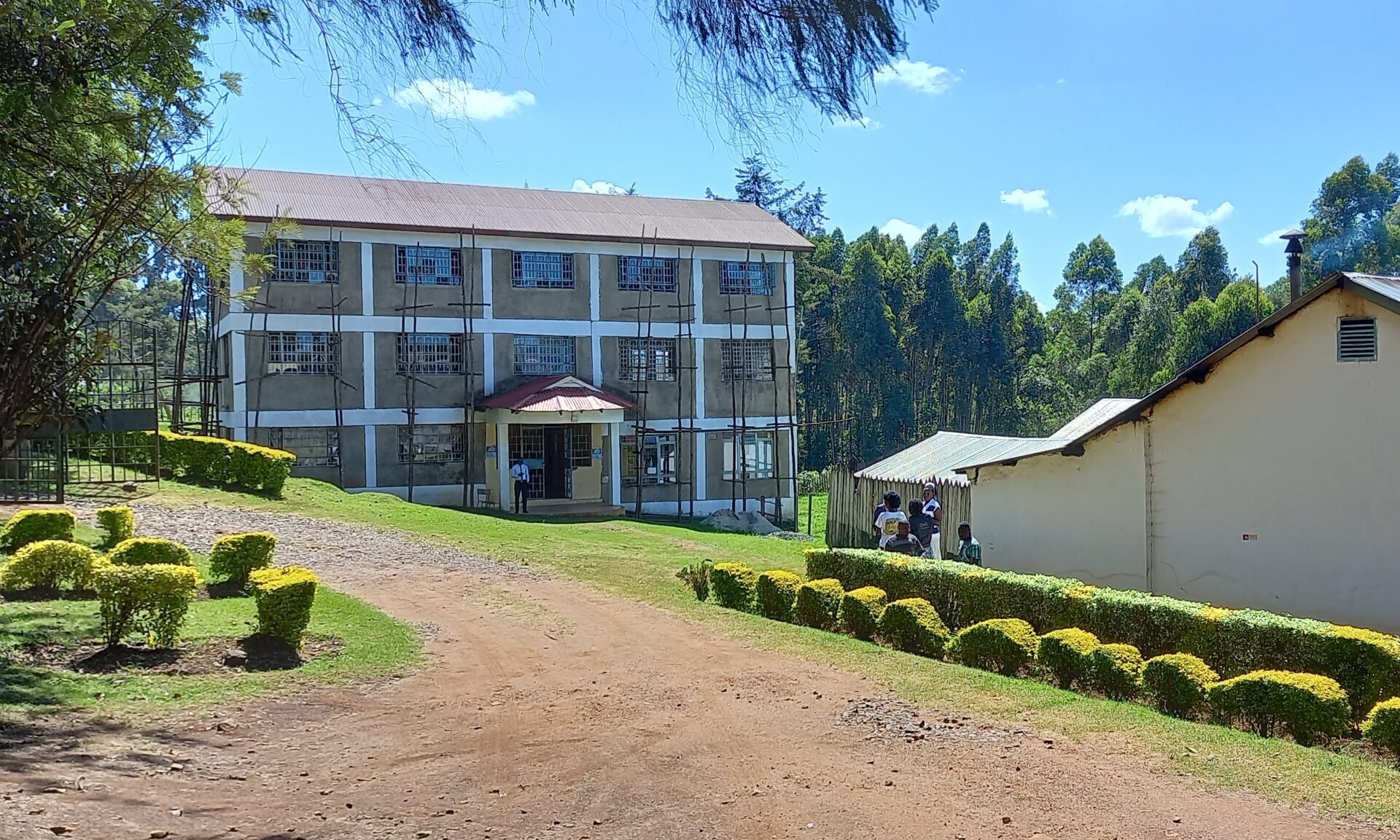 Revd Walter Rutto is an Africa Gospel Church minister. Quietly spoken and thoughtful he has a big heart and a big vision for training pastors in Kenya. Walter is founder of Transformation Compassion Network (TCN) and has developed theology and development courses suitable for non-academic learners as well as diploma and certificate level students.

TCN courses are highly practical with a substantial proportion of marks being awarded for field assignments. They are holistic and explore physical, spiritual, social and economic competencies. They are designed to build broad leadership capacities and are well contextualised. They are also engaging with module titles such as ‘Uprooting Cultural Lies’ and ‘The Love Matrix’.

The small TCN staff team and network of local course facilitators and coordinators are impressive but the impact on the ground in villages and homes is even more inspiring.

For example, when Pastor Bernard began collecting his neighbours’ cow dung, the community thought he was crazy. That was until they saw his banana plants! Bernard and his wife Lily were simply implementing some of the agricultural skills they had learnt as part of a TCN field assignment which has led to increased yields in their garden, a dairy project producing sixty litres of milk per day and a poultry project. Lily sells the beautiful flowers she grows in a horticulture project which has improved their household income.

Pastor Rita and Pastor Caroline are also TCN alumni. For their field assignment, they identified some of the neediest people living in their village including the elderly, those with special needs and vulnerable women. They organised litter picking and offered help with domestic chores. This has led to families being reunited, a healthier environment and new people attending the church. It’s a great example of the simple but impactful contextualised competency-based training TCN provide.

Revd Walter appreciates the potential for TCN courses to reach a wider audience through eVitabu and is set to become the first African to provide certified training opportunities through the app.

Walter also arranged for me to meet with the vice chancellor and senior leadership team of Kenya Highland University. The institution has been looking for a cost-effective way to digitise its courses and there is interest in exploring whether the eVitabu platform could be re-purposed to support online teaching and learning across the university’s curriculum. Watch this space!

While I was there, I was also invited to address the theology faculty in a chapel service. Following the service, about twenty students installed and registered eVitabu.

So, Kenya was a trip full of contrasts: two punctures, a new windscreen and a suspension joint repair, many kilometres travelled on smooth tarmac highways as well as roads that are not roads at all but more like dried white-water riverbeds.

I was welcomed by Maasai, Kikuyu, Kalenjin and Luo people, given access to bishops and vice chancellors as well as humble homes and churches.

I was showered with gifts from Java coffee and frozen yoghurt in a Nairobi mall to abundant ugali and outstanding bananas with a grateful pastor and his wife.

Kenya is a land of contrasts, but wherever I went I witnessed the reality that where hard-work and God’s faithfulness combine, minds are stretched, faith matures and the Kingdom comes.